The Back I Want to Kick (excerpt)

by WATAYA Risa
Winner of the Akutagawa Prize, 2003 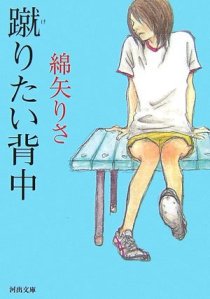 Soon after track practice started, large raindrops began to fall with a clatter. Practice was stopped and we all sheltered under the gymnasium roof. Enjoying the cool under the roof, bra straps showing through on our soaked backs, we dried ourselves off with towels. The immensity of the sound of the rain hitting the ground overwhelmed us, and we were silent. But in the middle of that smoke-like rain, coming from the athletic field towards us, the coach could almost be seen, bringing everyone back to life.

His trademark natural perm had become soaked and stuck down to his forehead with the rain. Everyone pointed and laughed, but as the coach came closer their expressions turned to doting ones, eyes blinking as if surprised. They acted clever, though the truth was they weren’t like that at all. I remember what they said next, just as the coach certainly does.

It was a story I was already so used to. But ever since the day that the coach had hid the information about the photochemical smog warning from us, scenes like this had become more bitter than before. The older girls were sitting next to me on the mat.

“If it rains like this we can’t practice at all. I mean, we changed clothes and all that, but it was just a waste of time, right?”

“Mm, me too. That’s why I just gave the pestering corps the ‘hurry up!’ signal. Whether they can persuade the coach before the rain stops is the real game.”

“If we’re tired, why can’t we just go home?” When I didn’t say anything to that, another one of the girls responded.

“No, we’d have to put everything away. Like the hurdles. They get rusty when you leave them out.”

“If all of us girls just said, ‘We don’t wanna clear everything off in this kind of rain,’ surely he’d let us off without doing it. Don’t worry, the coach is really reasonable.”

The coach is really reasonable. Even if they ‘forgot’ about the maintenance of the track equipment, even if they forgot to lock up the storeroom, even if everyone went off after practice to drink, it was just—“really reasonable.” I couldn’t hold back a small, scornful noise. Because, really, to hear someone call an adult with white hairs mixed among the black something like “really reasonable” was just depressing. I wondered if it meant something to do with having lived a long time.

“The track and field team has a good feel to it now, too. Last year’s advisor was too tough on us; you could tell he was the kind of guy who only looked at the results, so a lot of new students who joined just quit instantly. But this year everyone gets along with the coach well, so track is fun.”

“Isn’t it just because you’ve trained him?” I said it as if I were spitting it out. Well, now you’ve done it, I thought. The air between us became turbulent, chilling my skin. One of the older girls, still facing forward, replied in a low voice.

“Your eyes always cut so sharply, but in reality you can’t see anything at all, can you? I’m going to say just one thing now. We really do like the coach. More than you, anyway.”

This is an excerpt from a full-length translation of The Back I Want to Kick, already translated in German, Italian, French, and Korean. If you happen to be in the position to get it published, drop me a line: allwrongsreversed at gmail.com

One reply on “The Back I Want to Kick (excerpt)”

[…] also had a taste of this sort of criticism. Some readers of my first translation, The Back I Want to Kick (Keritai senaka) by WATAYA Risa, have told me they feel the tone is too ‘youthful’ and […]